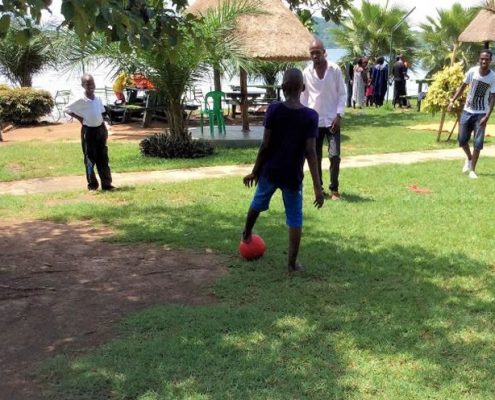 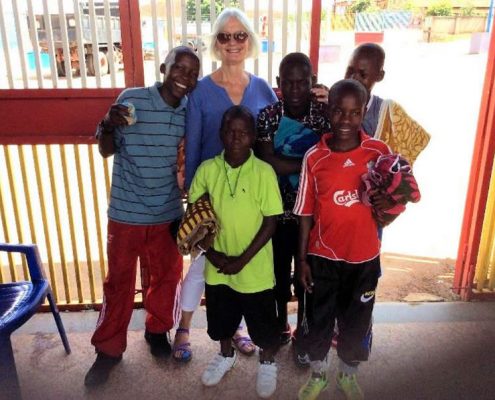 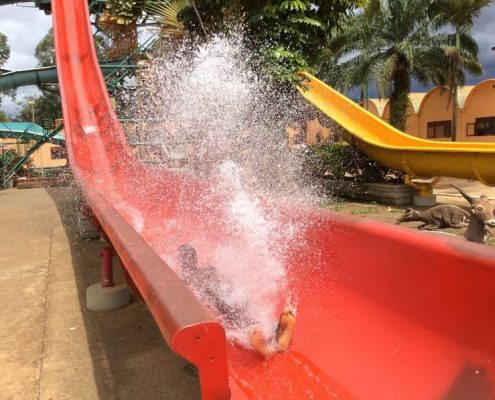 Ggaba beach is not far from George’s Place so last Saturday morning the boys enjoyed a game of football and the swings on the shores of Lake Victoria. There were a couple of Born Again churches there also who were baptising members in the waters.

Sunday I took the boys to an English service at the local Anglican Church. Betty the cook and Sam came as well. Driving to the church I managed to get the car stuck in deep mud so everyone had to get out whilst I manoeuvred the steep hill, even Betty who was dressed in a smart Gomesi. We were welcomed at the service by the vicar. As we left the church there was a torrential downpour but we managed to reach the fish market and buy tilapia for lunch.

This week we visited the KCCA (Kampala City Council Authority) to ask about obtaining permission to be feeding the street boys again in the Kisenyi area (we need to get their permission to be working legally, initially we had worked under another organisation, although we were providing the food and paying for the cook). We had a good meeting with the KCCA and I have written giving all the information they require so hopefully will hear back from them shortly! Their response was very positive and one of the Probation Officers said he would look out for a venue for us to rent. When we left their offices the car had been clamped, there were dozens of other cars there but no others had been clamped, I thought it was funny as they were asking for 100,000UGX, Bob negotiated and we paid 10,000UGX about £2.

Homes of Promise have been providing food and charcoal to AYFD a small NGO who feed a few boys in the Kisenyi area three times a week, we are not partnering with them as their facilities are small and we have been used to catering for between 80-100 youngsters which they couldn’t cope with but we are happy to be supporting them with rice, posho, beans and charcoal at the present time.

‘Search for the Lord and for his strength; continually seek him.’ 1 Chronicles 16 v 11

There has been a few problems this week mainly between two boys – after counselling and moving of bedrooms things seem to have quietened down but I believe it is difficult for some of them to settle. I took one boy for a long walk on Thursday morning down to the market in Ggaba, to see the boats and although we have difficulty communicating we got on fine and he was much happier on the way back. I think we need to be taking them out more as they are used to being out and not cooped up in one place – such a learning process! This Saturday we took them swimming at Wonder World.

I also attended a Crane meeting to go over the International Street Children’s Celebration and to discuss the way forward for the Keep Smiling Campaign which runs for a year. We are going to try and do a head count of street boys which entails going around the streets at night and giving out wrist bands to those sleeping rough and asking them to come the next day with any friends for a meal, not sure how this is going to work in practice but am happy to be apart of the team. Following a meeting with Humphrey from Crane, Homes of Promise are now registered with them.

Taken from the Crane website. ‘57% of Uganda’s population is below the age of 18. According to the Ministry of Gender 94% of Uganda’s children are at risk, and the government is only able to help 11% of those children, leaving 89% of marginalised children without government support. This makes the intervention of NGOs of paramount importance.’

As of end of April 2016 David is stepping down as treasurer, whilst continuing to support by emailing my weekly newsletters. I am most grateful to David for all his hard work in setting up Homes of Promise, particularly with the bank, Charity Commission and accounts. We simply wouldn’t be where we are now without his loyal and dedicated support.

Life in Kampala continues to be interesting, with plenty of rain, sun and challenges. Two of Pat’s dogs had a fight on Wednesday afternoon and the little Jack Russell (probably her own fault) came off worse with bites and bruises so I accompanied Pat, Sophie (dog) and Patrick her security man at the vets before we had supper and bible study, her car had been serviced that day but obviously something was not right with it as it kept lurching forward in first and second gear – we prayed all the way back to her house for travelling mercies. Whilst William my security lad was having a ‘nap’ one afternoon our three baby chicks were eaten by a cat, he asked if we could put poison down for the cat but I explained it must have been hungry to eat all three! I was really sorry for Jenny the mum as she was upset.

I believe there has been snow at the Oval so presume you are not enjoying spring like weather in the UK. The absence of seasons here takes some getting used to and although it’s either wet or dry its mostly warm/ hot.

Thank you for all the prayer support.