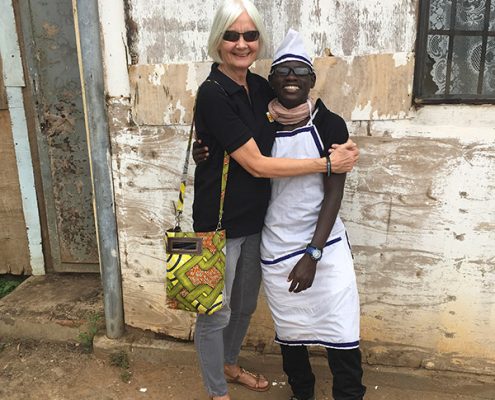 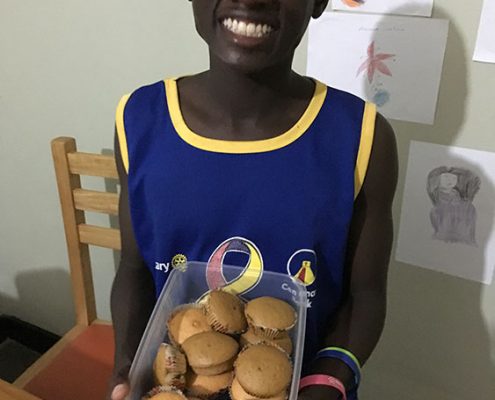 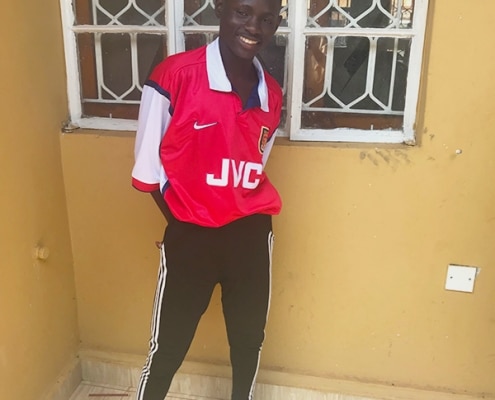 It was a hot stormy Friday in November 2015, we had been feeding boys in the Kisenyi slum area, usually about 80 of them, when one of the ‘uncles’ involved in the programme came and told me a young boy was very sick – he had not been taking his medication. I suggested he took the boy to the latrine block to bathe before giving him clean clothes. Tresor and I then took the boy to the local hospital. It was late in the day when we finished there and torrential rain had started. Tim had been given tablets and we were advised to bring him back on Monday – what was I to do with him until then? He was sick, exhausted and hungry. I took him home with me, he ate and slept most of the weekend and on the Monday we were back at the hospital. A few days later we travelled to Jinja and found an uncle, whose care he had been in since his father’s death about six years earlier. A neighbour had regularly fed and looked after Tim as the uncle did not seem to want the responsibility of the boy.

Whilst with me we did have a few problems – Tim liked ‘removing’ things but always returned them when I noticed they were missing and wasn’t always keen on washing! He enjoyed cooking and we encouraged him to make cakes. He started at a local primary school, attended Sunday school at KIC and settled in.

Tim stayed with me until George’s Place was opened in April 2016 when he entered the home. He continued in school and in August he joined three more of our boys at CCP Vocational Training in Mbale to study cookery. He excelled and cooked lunches most days for the staff, specialising in cake making, graduating after the course. Tim has had some setbacks, has been unwell on several occasions, usually when he stops taking the extremely strong medication, also had TB. He has disappeared at times, mostly when I am out of Uganda but always returns and seems settled now.

We helped him start up a small business making and selling chapatis, by the side of the road, but this didn’t work out. As far as we know he is an orphan – we have located an aunt and cousins who he visits regularly. Last year he started working in a local bakery, this stopped during lockdown but has just started up again, he continues to make bread, biscuits, cakes and pizzas.

Please pray for Tim – (not his real name, he changed his name when we first met him as a lot of the boys do). George’s Place has been his first stable ‘home’ where he is accepted, loved and cared for. I have a special ‘love’ for Tim as he was the first boy God sent to Homes of Promise. He loves swimming, dancing, cooking and with God’s Grace will grow and develop into a caring member of society.