Back in Uganda, talking with the boys, cleaning the house, pork or chicken 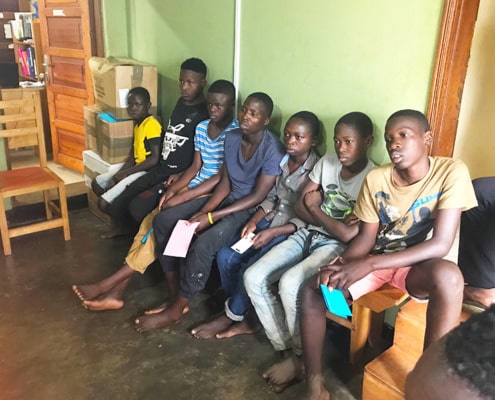 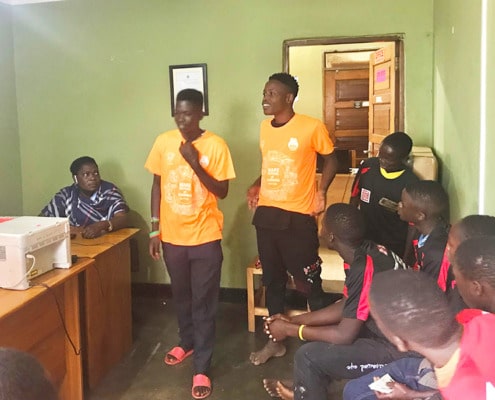 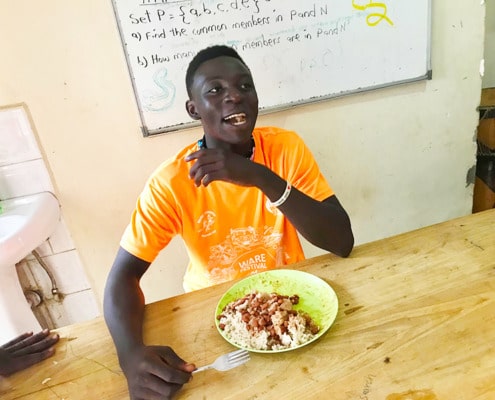 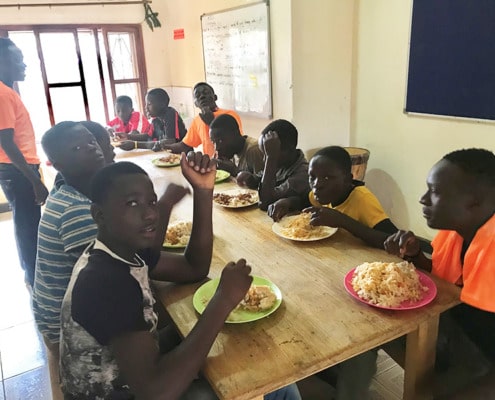 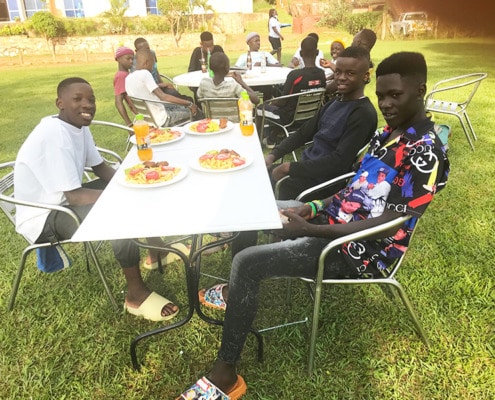 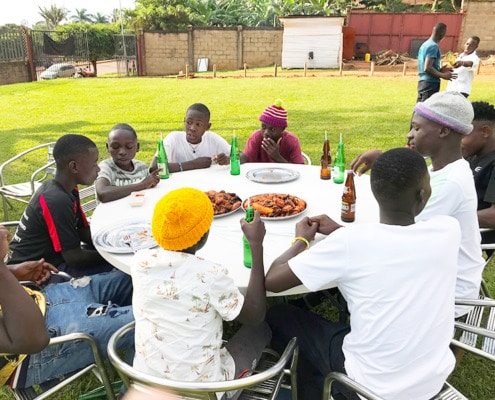 I arrived back in Uganda late on Wednesday night. I hadn’t told the staff or boys that I was returning so when I arrived unannounced at George’s Place on Thursday afternoon it was a big shock to them all. Some of the bigger boys had gone with Uncle Sam to cut down bushes, Simon Peter (who has acquired a boda) went to inform them I was there. The younger boys were with Dennis and Aunty Gorette. They are all well and were very excited to see me. Ronald hurt his leg during the afternoon and came hobbling back – Sam informed me it wasn’t broken and just needed washing, cream and a painkiller – he did seem fine the next day.

I’m afraid the house looked in a bad state so Friday morning everyone was involved in general cleaning and were given a talk by me on keeping the house clean and themselves. Shadrach had collected boxes from the U.K. on Thursday and I had bought some T-shirts, that I collected last week, with me – so they were all given a new t-shirt, toothbrush, knitted hat and ‘scrubbers’ for washing with. I had been given money to buy sweets to take back with me, which are a real treat so these were given as well, there are enough sweets for the next week.

“I can do all this through him who gives me strength.” Philippians 4v13

So far I’ve seen Augustine, Godfrey, Timothy, Derrick and Simon Peter, of the older boys and I’m sure some of the other older boys – Patrick, Emma, Big Brian, Anton, will make an appearance soon, when word gets out that I’m back. Peace told me Shaffick is doing really well and his father has helped him set up a small hairdressing business – such an answer to prayer.

I had also been given some Mr. Bean DVDs that they watched on Thursday and Friday afternoon. There have been some torrential downpours since I’ve been back and the new films were really appreciated, though they did ask if we could look for Charlie Chaplin ones! I had forgotten how noisy it is in George’s Place but I’m sure I’ll get used to it again shortly.

Derrick also arrived Friday afternoon, he had come to collect some things from the market for making metal doors and window frames and take them back to Mbale. I was told these items can be cheaper in Kampala, I wasn’t sure that he just wanted a break and to come and see the boys – he has taken on a lot of responsibility recently in looking after his father and younger half siblings and looked very weary. We were able to give him some clothes for his family and he stayed the night before Shadrach took him to buy the items.

When we were all sitting around talking with the boys, Uncle Sam told me that during the first lockdown Omoding had given them a verse, Genesis 15 v 1, “Do not be afraid Abram, I am your shield and your great reward.” They had felt this was a verse for them, that God was protecting them and their families. Omoding’s mother has just telephoned me and so I had an opportunity to speak with him – he has been staying in the village for the last couple of weeks. Also Ivan called to speak with me.

At the end of last year I gave up my rented house in Kampala and now will be staying at my friend Diana’s for the next few weeks – she is still in Canada. I went and called there today and saw Peanut my dog who was also excited to see me. He is rather thin looking but hopefully will put on a few pounds now I’m back and giving him extra treats.

Saturday afternoon Sam and I took the boys out for a treat, pork and bananas for those who eat it and chicken and chips for the 3 that wouldn’t! It was a pleasure to be with them, they were quiet, respectful, well behaved and enjoyed their meal.

Thank you all for your ongoing love and support for these boys – of course there were ‘moans and groans’ when I first arrived but this gave me an opportunity to speak to them about appreciating and accepting each other and the staff, we often don’t get things right but God loves, forgives and accepts us and we need to see Him in each other – so many God given opportunities to talk about The Lord.

I’m sure this coming week will be full on but it’s good to be back and a real privilege to be part of this work.

The boys help their neighbours, boxes from the U.K., Flavia looking after 33...

Work on the house, Spring cleaning, new laptop and monitor, out after curfe...
Scroll to top