‘Fish and chip’/toddler jumpers and teddies given to children in hospital and villages, 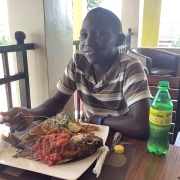 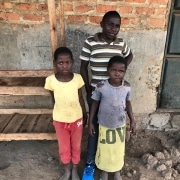 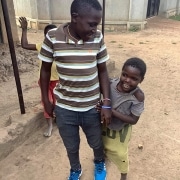 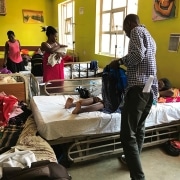 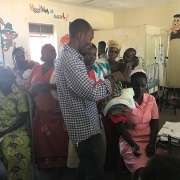 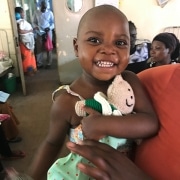 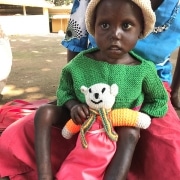 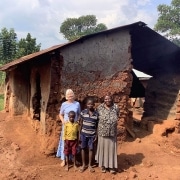 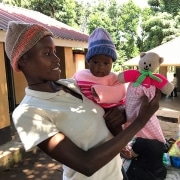 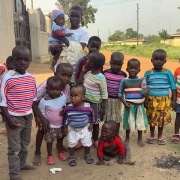 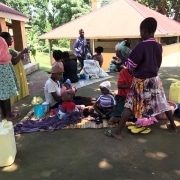 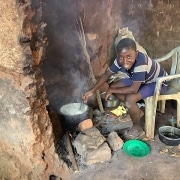 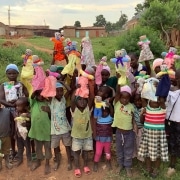 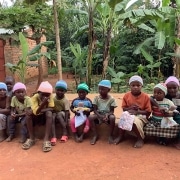 I’m sitting in the car waiting for Bob, he has gone to get written permission for us to take baby clothes/toddler jumpers and knitted teddies to the wards in the hospital. It’s incredibly hot and sunny here.

We travelled up to Mbale yesterday, bringing Shaffick with us, he has gone to stay with his mother and twin sisters in Bugiri for a few days. We saw plenty of baboons along the way. Shaffick returned into our care following the International Day of the Street Child in April this year. He had left us and run back to the streets last September, he has spent years sniffing jet fuel and needs lots of unconditional love and attention. He is a natural leader and makes sure everything is fair from food distribution to discipline – he’s loud and you are always aware of his presence – except in the car – the poor lad suffers from travel sickness, (even sitting in the front), and was ill most of the way here. We stopped for lunch and he ordered tilapia, (which he loves) a large freshwater fish found in Lake Victoria, we had it packed to take away rather than him eating it in the cafe! His mother was not at home when we arrived but his sisters were – hopefully he was happy to share his fish – his mother called to let us know when she got back. We had the opportunity to give out some T-shirts and jumpers to neighbours children.

May the favour of the Lord our God rest on us; establish the work of our hands for us.’ Psalm 90 v17

Bob got permission from the Hospital Secretary and we spent about 4 hours handing out ‘fish and chip’ jumpers, hats, toddler jumpers and the knitted teddies. We are well known at the hospital now and can move freely from ward to ward, even the Prem. Unit that had over forty tiny babies. There is always such a need here in the maternity and children’s wards. Surprisingly we met Silivia (who we built a house for in 2015) with one of her older daughters whose baby was sick.

After the hospital visit, we went to the village to meet up with Mary as we are planning to build a house for her and her grandchildren (her daughter has died and the two boys now live with her). One of the older boys was off from school as Mary didn’t have the money for his exams and lunches (of course we helped out and he will be back on Monday). Her house has virtually collapsed and they are living in very poor circumstances. Two builders came and gave us estimates for the work so hopefully work can start shortly. More hats and teddies were distributed!

We were busy in the office at the beginning of the week, we have a Management Meeting planned for next Wednesday. We are delighted that Nora, our lawyer, has agreed to be on the committee, with the Government Official, the Probation Officer, Health Inspector, Revd. James and staff from HoP – hopefully, all our paperwork is in place! Petra has finished work for a while as her baby is due on the 13th so I shall be kept busy typing up the accounts in the meantime.

The boys are all fine and enjoyed their school trips. Derrick is much better and plans to return to Vocational Training School on Monday.

We arrived back in Kampala late Saturday afternoon going straight to KK Beach to spend time with the boys and then taking them back to George’s Place – I arrived home about 9pm. A full week with many challenges and blessings.

Derrick has malaria, visiting Patrick, our older boys making themselves use...