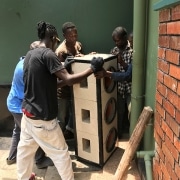 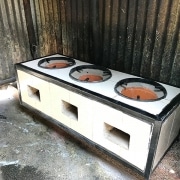 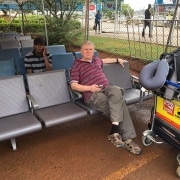 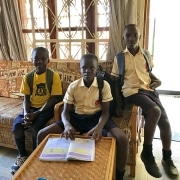 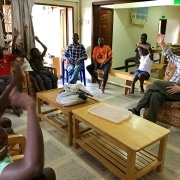 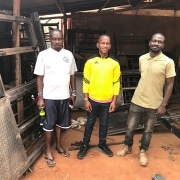 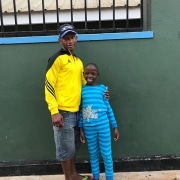 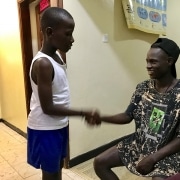 The weather has changed and it’s rained every night for the last week. The days have been warm but it’s definitely cooled down from the temperatures we were having so I’m assuming the rainy season has arrived! Rain is considered a real blessing.

This week we invested in a new stove with three charcoal burners. The cooks have been using three small metal stoves, which had disintegrated, the new one should be more economical. It took five men to carry it from the lorry to the outside kitchen and Gorette was thrilled when she saw it!

Tuesday saw the arrival of boxes of clothes and sacks of trainers from the UK – the boys have all been given t-shirts, vests, pants and jumpers making everyone very excited and happy.

Bob collected Uncle Martin on Friday from Entebbe and following the boys welcoming him after school, produced sweets, from his son Michael, (muesli and chocolate for me) and ‘goodies’ for the office so that we can have all the laptops linked and files backed up. He has already fixed the WiFi which had stopped working and mended some of the leads on the television and video player – much appreciated.

Patrick starts an apprenticeship on Monday at a welding business near his home, he will be staying with his father and stepmother. He is hoping to visit us occasionally at weekends. Prayers please that he settles.

My car has fallen ‘sick’ and needs major work doing to it, but considering the rough roads we use and it’s age (2000 model) it’s understandable and hopefully will be better soon! The minibus has come in useful as at least we have transport.

Two young men from St. Paul’s, Katusso (the church the boys attend) have been coming to George’s Place and teaching some of the songs they have written. Asaph is our lead singer and we are hoping to produce a video of the boys singing and dancing. There is a message in the words of the songs and one is about how God and Homes of Promise have changed their lives. We are hoping the boys will be able to sing this at the International Day of the Street Child in April.

Of course, we visited KK on Saturday afternoon. Godfrey came in the evening and is staying a few days before visiting his grandparents. Augustine has worked all week and is saving money! Tim also worked a couple of days and baked cakes for the boys. It’s not easy for our older boys to be finding work but they are growing into nice young men and we are thankful for the way our Lord has changed their lives.