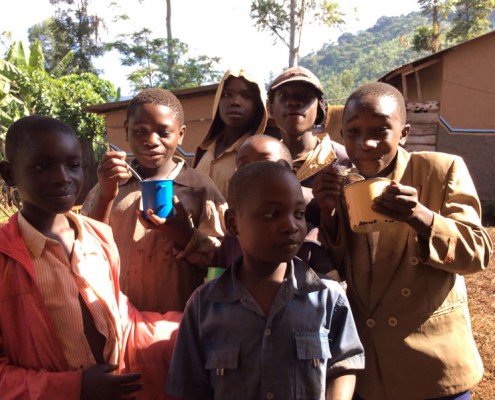 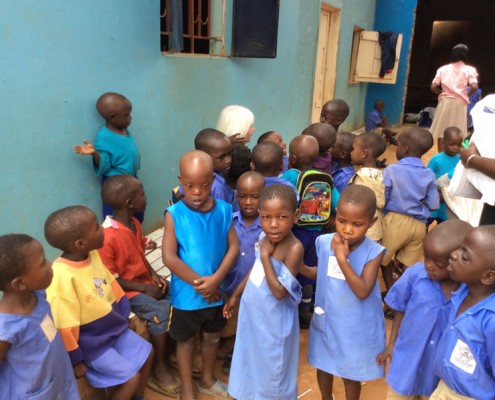 I’ve been back in Uganda 10 days and yesterday it felt like 10 weeks so have booked myself into a nice hotel for a couple of nights recuperation, rest, prayer, good food, etc.

As I have said many times before ‘Life can be very difficult here’.

Last week I visited Sarah’s little school and the doors on the room have now been fitted, making a space available to be used by the school during the day and for sleeping accommodation at night. Sarah presented me with a bright pink knitted bed jacket that she had crocheted so now look like a real granny! She’s in the process of making one for my mum as well, she is really lovely! The children, danced, sang and proudly recited the rap I had taught them.

But…… Bob fell ill last week and was diagnosed with malaria and stomach ulcers, he was in a local clinic (where you take your on bedsheets), it wasn’t clean, I didn’t see anyone wash their hands, except for me with my hand gel, he was on quinine drips for days which has affected his hearing and it was definitely a worrying situation. Everyone’s family sits with their ill relative and when I visited his mum and children had been there for hours in a very small room. He came out of the clinic last Friday but was very weak, his uncle died that night and the whole family had to travel to Bududa, about 7 hours drive away for the funeral on Monday. I offered to take some of them as had visited the uncle on several occasions and all the family in that area and also didn’t think Bob should be driving. The minibus left before us on Sunday morning and we arrived about 4.30pm. There were probably 14 of us, not sure lost count.

‘If you, Lord, kept a record of sins, Lord, who could stand? But with you there is forgiveness, so that we can, with reverence, serve you.’ Psalm 130 v 3

Bududa is a beautiful area, fairly near the Kenyan boarder, very green and lush and has had numerous landslides due to all the rain and it’s the rainy season! It rained, poured down for most of the time! There were tarpaulin areas where people stayed outside for days, there must have been at least 500 people at the funeral, no facilities. The first night I stayed with the mayor and his wife, no electricity, only water collected from the river, outside latrine that was locked, very basic, think I ate goat, very chewy, great hospitality.

The second night I stayed at Fred’s, one of the son’s of the late, and shared a room with his mother-in-law, even more basic, washed in an alleyway! The third night I went to Mbale and stayed at a small hotel with hot water and a generator! The mud was unbelievable, the roads dangerous, the children filthy, the lack of facilities indescribable. Everyone smiled and greeted each other warmly. We prayed for good weather for the funeral day and PTL it didn’t rain! But the next two days it poured down. People just get on with things here and don’t moan, it’s raining….ok, we’re staying outside and it’s cold ok, the babies and children are filthy ok, there’s only the river to wash in ok, the one latrine is being used by 500 ok, there’s only Posho to eat which is being cooked in the rain, ok.

I believe I was the only one who found the situation difficult, but then the only Muzungu for miles, we arrived back to Kampala late Wednesday evening.

Yesterday morning had another lesson in Luganda so today will spend time swatting up.

Sorry that this sounds such a negative newsletter – but as I said at the top ‘Life can be very difficult here’ and God has so much to teach me.