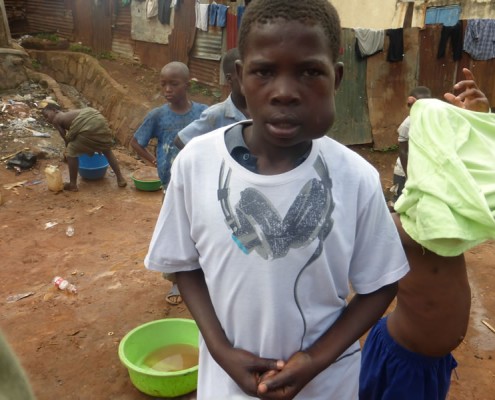 Anton first came to our attention in 2015 when we were running the ‘Meals for Kids’ programme in Kisenyi. He was living on the streets and had a large tumour on his face – we took him to a local hospital who referred us to a private doctor/clinic for the tumour to be removed.

After finding and contacting Anton’s relatives (he is an orphan), also the Probation Officer and another Charity who agreed that he could stay with them, (our home hadn’t been opened but Homes of Promise were willing to meet the expenses) Anton was taken into a private clinic for the operation and the tumour removed. It was an anxious few weeks with hospital appointments and visits, but he made good progress. He stayed in the care of the other charity for about six months, who later reunited him with an aunt and her young children in the village. This, unfortunately, didn’t work out and he again ran back to the streets of Kampala where Bob found him.

By this time George’s Place was registered and opened and Anton joined our other boys in June 2016. He attended Kennedy Primary School and then went on a course to ‘Agromax’ an organisation training young people in farming techniques. He had grown tomatoes, melons and cabbages at the home and had an aptitude for gardening.

In December 2018 we managed to purchase just under an acre of land for him to start his own project near his home village. He planted matoke, maize, cassava, beans, and cabbages – the first season he did extremely well, but his village is about a 5-hour drive from Kampala and it hasn’t been easy to give him the support he still needs. There have been problems with lack of rains and also his commitment to the hard work but hopefully, he is starting to get back on track.

He is a quiet, thoughtful, determined, contemplative young man. Anton speaks very good English and has joined the local football team. He is only 18 years now, lives on his own, cooks and looks after himself and since lockdown has been unable to visit George’s Place – thankfully he can contact me on WhatsApp.

Prayers please for Anton as he settles fully into village life.