A visit to the cinema, four new boys join our family, working in Kisenyi. 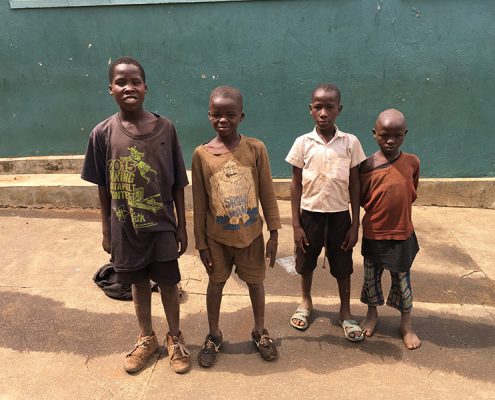 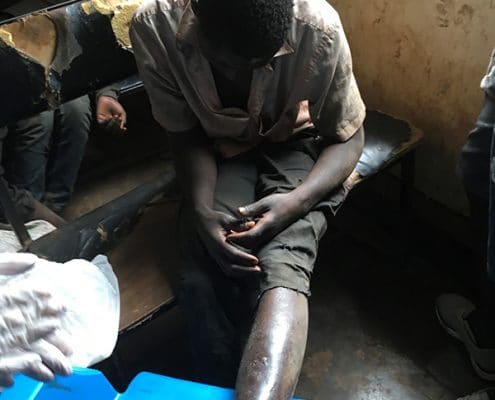 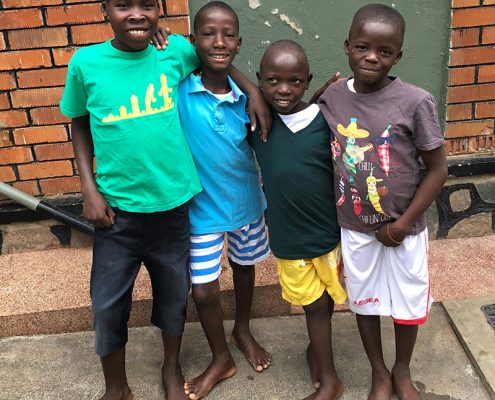 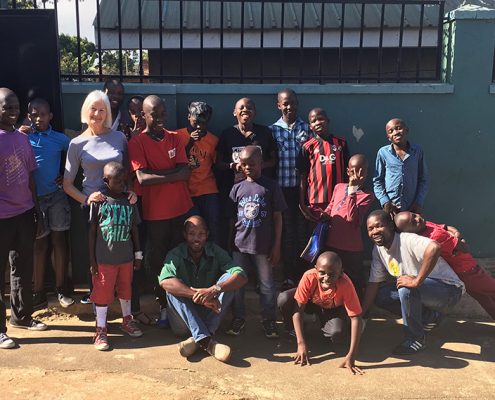 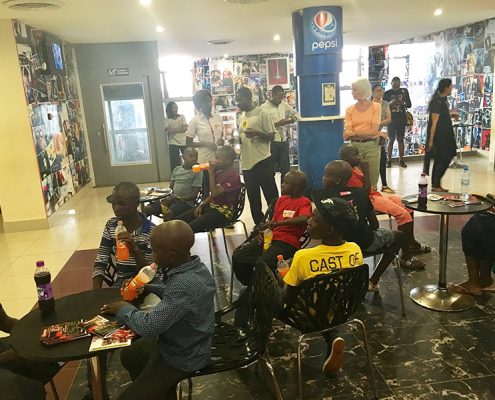 Dear friends,
Last Monday was a bank holiday so the boys were not at school. They enjoyed one of our chickens for lunch, all but Anton, who looks after the chickens and can’t face eating them – I managed a small amount! Later in the afternoon we were taking them swimming but the rain started when we were on our way so we visited the cinema instead – some of the younger ones seemed to enjoy the soda and popcorn more than the film but it was an experience especially travelling on the escalator at Acacia Mall, which they had not encountered before, Little Brian had to be carried down.

Anna the Swedish nurse who came and talked to our boys last year has started up an outreach programme to street boys in the community hall in Kisenyi (the hall – leaves a lot to be desired!) on a Thursday morning, Bob and I went along this week. We knew some of the helpers who all work with street children and a few of the boys were familiar. Anna talked about the Eucharist and we then shared bread and juice with the boys and prayed for them individually. A film about Jesus was shown, a bible story told, wounds were cleaned and dressed. Homes of Promise are planning to start feeding the boys beginning next Thursday (about 80). This will just be on a Thursday whilst we see how funds go. Anna is in Ethiopia next week so I’m taking over with the bible story, Eucharist etc. Prayers, please. Whilst we were there a young man, was carried in with a very bad foot and leg, Anna was concerned as she felt he might die without treatment which she couldn’t give, consequently I took him to the local clinic who are now looking after him. I and his friend held him down whilst they lanced the wound, he screamed and fought uncontrollably, no anaesthetic or painkillers, I thought I was going to faint, nursing not being my thing. So prayers for this young man, please.

‘I will restore you to health and heal your wounds declares the Lord.’ Jeremiah 30 v 17

We brought four of the youngest boys who were showing signs of sickness back with us after we had found and received letters from the LC1 to take to the local Probation Officer. They are James, Victor, another Shaffick and Saviour and are settling in well – they have all been checked at our local clinic and all but Shaffick are having treatment daily.

This week we also had a Management Meeting with the Probation Officer, Health Inspector and Mayor’s Representative, who represents the Government attending and of course Revd. James who is also on our committee. I think it went well, we seem to be doing things in the correct way and they appreciated our work.

Visitors – we have had other visitors this week as well. On Friday afternoon Brian arrived home from school with an American man, Lynn, who he had met on the way. Lynn is visiting his daughter who is working for a local hospice. He had spoken to Brian and his friends as they walked along and Brian had then asked him if he would like to visit his home. The boys are getting so confident and outgoing especially with ‘muzungos’.

We also saw a young lad collecting plastic bottles from the rubbish at the sides of the road near George’s Place Saturday lunchtime so we invited him in, let him bathe, gave him new clothes and fed him. He has parents and two older brothers. His father has no work and the mother tries to make a little money selling tomatoes. They cannot now afford school fees and obviously, they are struggling, there is so much poverty around, it’s difficult to know where to help. But we trust God to lead us to those in greatest need.

With love and prayers from Kampala.

Problems at school, back in Kisenyi, supplying the Mothers’ Union with...
This site uses cookies: Find out more.
Scroll to top