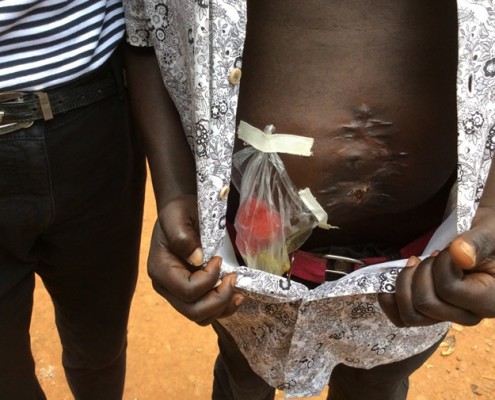 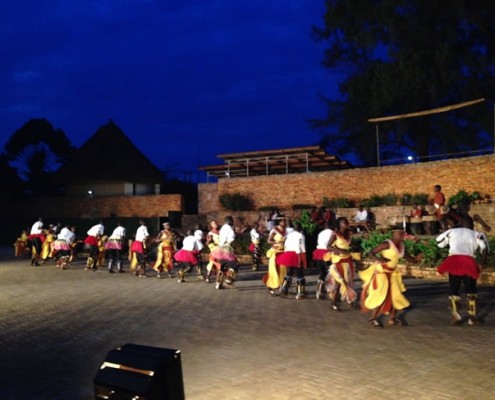 We should always be giving thanks for our National Health Service!  Today whilst I was with the street boys, dressing wounds for many of them, a young man Sirage, aged 22 and living in the slum area came and asked for help.  He was in pain and I was asked to go to a quiet spot to see what the problem was.  Sirage had been operated on a few months ago and has had a ileostomy (stoma bag) operation, much to my horror his large intestine was protruding through the ileo opening, this was infected and a nasty substance was oozing from it.  For those of you who know me well and my non nursing gifts you will appreciate how I felt.  This young man had returned to the hospital where the operation was carried out and had been turned away because of lack of funds.  Of course we took him to another hospital and he is now safely tucked up in bed on antibiotics and being operated on tomorrow morning,  I won’t go into the details of how long all this took or the state of the hospital but will say, in the A & E department I could have donned rubber gloves and started a spring clean, but the doctor was pleasant and helpful and I was relieved we were being seen relatively quickly. The doctor even telephoned me at 9pm this evening to let me know Sirage was on Luke Ward and I could visit early tomorrow morning.

Update on Antony, we have been trying to contact Antony’s relatives to obtain permission for the operation to remove the tumour.  His ‘aunt’, was only a family friend and not a relative, but she kindly gave us the telephone no. of his father, but so far the phone has been switched off – probably no airtime.

It has been a strange week, I did start looking for a house to buy for the street boys project as some of them are very vulnerable – but am leaving this for the time being as properties are expensive in the Kampala area – continuing to pray for the way forward with ‘my’ boys!

Socially this week – I met up with Nora and her sister Christine who stays in the UK  she is in the process of registering a charity for people living with disabilities in Uganda.  Also saw Francis and Dorcas, it was the first time I had been introduced to their son who was born 2 months ago.  Sunday evening I went to an African show which was amazing with drums, dancing, singing and a really good comedian – my dear friend Bob took me.  Barbra and I have watched a number of DVDs this week in the evenings – all true stories – one called ‘Mary and Martha’ was about two mums, one American the other British who had lost their sons through malaria whilst in Africa and how this motivated them to raise awareness back home.  I’ve also been reading the ‘Elephant Whisperer’ recommended by Chris B, a really good read.

I hear you are all enjoying the good summer weather.  Thank you for the emails, prayers and support.

Jane takes Antony to hospital for his face tumour operation

An update on Sirage and other charity work
Scroll to top