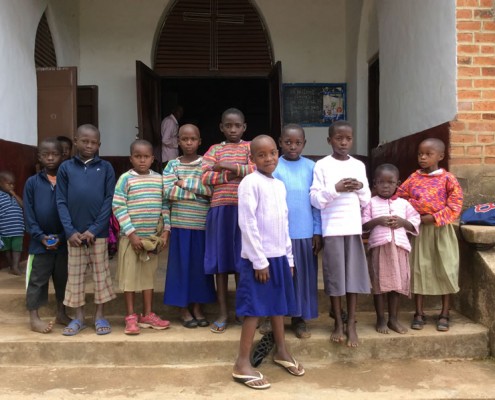 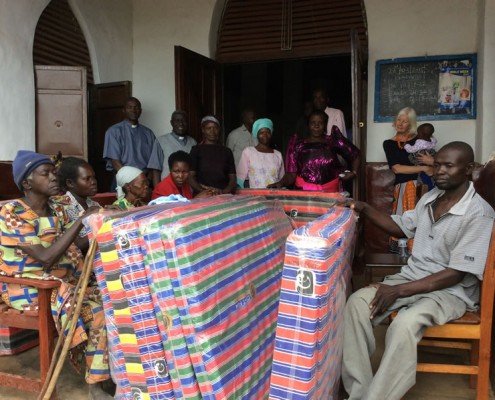 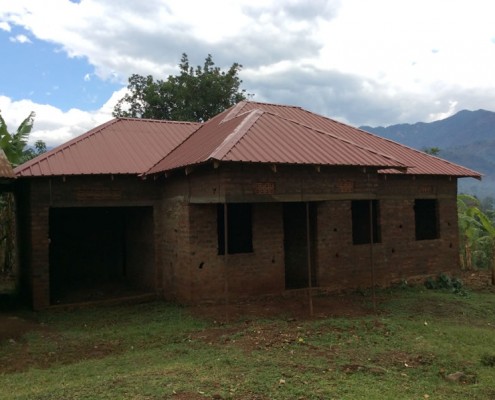 I travelled on Wednesday to Mbale with Peace, her sister Enid and their 4 yer old niece.  I had expected to go on my own as far as Jinga but when someone knows there is the possibility of a lift/outing life changes.  As Peace knew the route I drove all the way.  Peace and I settled into a small hotel.  The following day we collected Bob, bought 10 mattresses and went to the church in Nabumali.  It had been arranged for the people receiving the mattresses and the Sunday School children to come to the church, we had underclothes and beautiful jumpers to give to most of the children, these had been knitted by MU members and friends at home.  As it has rained and the weather has turned slightly cooler these were all well received. There were prayers of thanksgiving. Following this we went and looked at Silivia’s amazing new home and then met with all the local dignitaries at a centre for the blind nearby. Canon Sam chaired the meeting and appreciation speeches were given by a number of local councillors, including Silivia’s tribal leader, this was followed by cake and a cooked lunch for everyone, a real celebration.  I hadn’t expected any of this, but it seems to be what happens in the rural areas when the community wish to show their appreciation, it was emphasised by the Canon that praise and thanksgiving should be given to The Lord for what has been achieved.

We then travelled on to Bududa, calling in on a relative of Peace’s who had been an MU worker, called Grace, and would you believe it, had lived with in Finchley for three months (with a past MU London Diocesan President) she has given me a letter for Molly – it’s a very small world!  We travelled on and visited the MU hostel and vicarage that had previously been given iron sheets for roofs. (Silivia’s new home, the hostel and vicarage all have red roofs, rarely seen in this area, a sign that Homes of Promise or Bob have been involved!) Before leaving Mbale this morning we went and visited the Oasis Project where Ruth taught last year and saw the good work that is being done for the women in the local community and children.

On Tuesday evening I attended an MU meeting at Canon John and Joyce’s home, there was a bible study on Ruth, led by a few of the members and we sang and prayed together.  As it was Sue’s last evening before returning to the UK her and I stayed for supper afterwards.  In May the MU meeting will be held in my home, nothing changes, and I have been asked to demonstrate cake making as I had taken a couple of cakes with me!

Monday Caleb came for a meeting so lots to think and pray about with the Street Boys project. It seems to have been another busy week.  The children are coming tomorrow, Saturday, and we are off swimming – their Easter treat, I have my language lesson first at 9am.

I leave on Monday evening and am really looking forward to coming home – there can be a lot of pressure especially when there is so much need everywhere and everyone is looking for help so there is a continual need to be trusting God for guidance, strength and patience, (which can be lacking).

Have a blessed and Happy Easter.

Katanga slums and a hairdressing project

A visit to Sarah’s school and a funeral in Bududa
This site uses cookies: Find out more.
Scroll to top