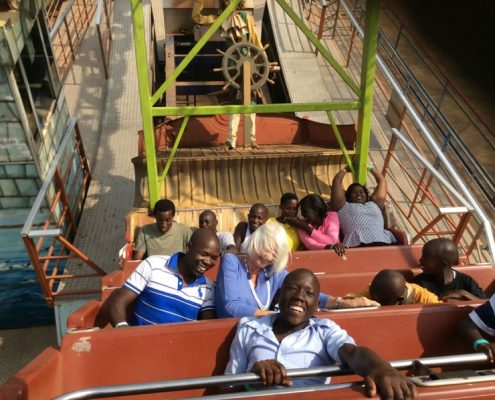 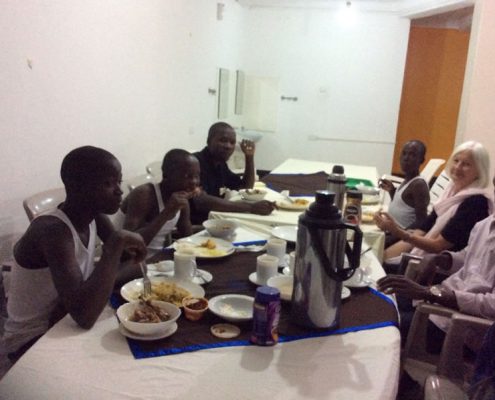 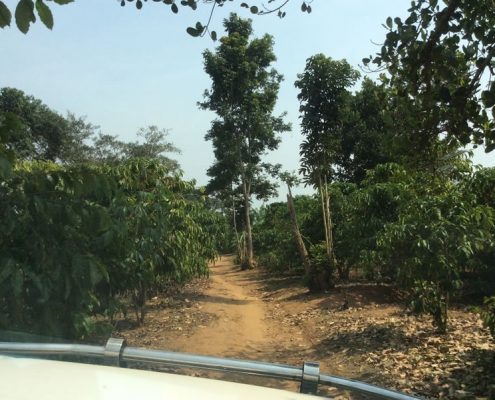 This week we travelled to Masaka with three of the boys to visit their families.  We stayed overnight at a cheap hotel (about £14 a room, only cold water to wash with). Whilst we were sitting eating supper Godfrey remarked that only God could have placed him here, sitting at this table with this food and sleeping in such a good bed.  We had visited his grandparents, his father died last year and they are not sure of the whereabouts of his mother (no one seems to even know her name), the ‘oldies’ (ten years younger than me!) work the land and grow enough food to survive on which must be a challenge, there hadn’t been rain for a while and everything was really dry there.  It’s been a privilege to spend time with the boys, meeting their relatives (Samuel’s grandmother is a real character – got the boys to dig up cassava, a sackful, for us to bring back.  We prayed with each of the families before we left them.

There was only one hiccough – I opened the glove compartment in the car and a rat scurried through into the back of it, I screamed for the car to stop and jumped out, it’s still there and we had to travel around and then return to Kampala so I was rather anxious!  The rat is still in the car, (four days later) wandering around now as it jumped out of the glove compartment and chewing everything!

We visited Brian’s family, he was so happy to see his mother who had left his father just before he left, but has now returned home, it was a very tearful reunion, there are 5 younger children, the father is very strict and wanted to beat Brian but Bob explained that was not allowed, we also saw Brian’s grandmother who gave him a cockerel (the boys would like to eat it but not whilst I’m around!) plus lots of other members of his family.  It was a tiring trip all their homes were miles from the main roads over dirt tracks but at least some sort of reconciliation process has started.

‘…..has not God chosen those who are poor in the eyes of the world to be rich in faith and to inherit the kingdom he promised those who love him?’ James 2 v5

We have a new volunteer, Sharon, a young lady who is teaching the boys English, she is coming three mornings a week and definitely getting their attention, she is at Makerere University.  Rogers (trained as an Engineer) teaches the boys maths and Uncle Sam is teaching them Social Studies so at least they are receiving some education.  We have been in contact with a local Vocational Centre as I believe some of the older boys would benefit from training courses, in either mechanics, carpentry, building, or plumbing.

Ramadan has finished and there were lots of Muslim celebrations on Wednesday for Eid, so it’s been a quiet week in Kampala due to the holidays.  Also lots of the Missionaries are returning home for the summer so KIC is not as busy.

Today Saturday we took the boys to Wonder-world, it’s been closed for a few weeks for renovations but nothing seemed to have been improved.  The boys enjoyed swimming and making fun of Uncle Sam who shouted for the boat ride to stop, which made us all laugh all the more – it was a really good fun day.

With love and blessings.

Meeting another family, a typical week at George’s Place – First...